Halloween is on its way....sort of 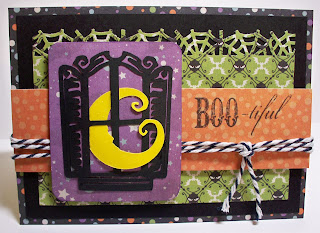 I got the MS spider web edge punch this weekend at TJ Maxx (3.99!!) and couldn't wait to use it. The sketch one posted on one of my FB groups. The patterned paper is We R Memory Keepers and the solid is from my stash. The twine and the stamps (Fall-O-Ween) are from K Andrew Designs. The moon has Glossy Accents on it but it's not showing in the picture. It was cut from the October 31st Cricut cartridge using Cricut Craft Room.
Posted by Lynn B. at 9:35 PM 2 comments: 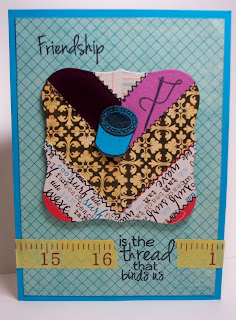 I had a bunch of scraps from cards I've been making and wanted to do something with them besides throw them out. I put a bunch of them together in a chevron pattern on a long piece of paper and cut a piece out with a spellbinder die. I wanted to use one of the K Andrew Designs sets I hadn't used much and this seemed like a good piece to use it on. The set has several stitching stamps, a needle and thread, a spool, some scissors, a thimble (others I don't remember), as well as several sentiments. The washi tape I just got went well with the stamps so I used some of it, too (ok, so it's not all scraps).

I pulled the blue from the Tahiti scrap and used it for the spool of thread. It may be a bit too bright for the rest of the piece it's on. I may throw a few more embellishments on it later, any suggestions? I have some scissors charms coming this week and that might be cute.

We (teachers) go back to school Monday. It doesn't feel like we've been off long at all. It's going to be a different year, lots of changes. Hopefully I will still have time to play with my paper:)
Posted by Lynn B. at 10:52 PM 2 comments: 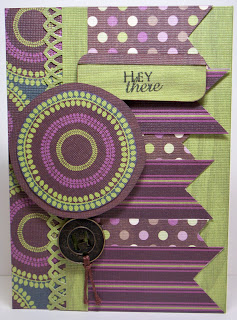 This is the card I'm entering into the DCWV stack-a-holic card challenge this month. There is a sketch to follow --------------->
and this version is pretty close. I used the Latte mat stack to create it. The embellishment is a Tim Holtz holiday piece that I was able to turn over to the back and use since the H is reversible. The stamp is  K Andrew Designs stamp from the Coffee and Tea Treat set. The twine was from my stash and the punch is Martha Stewart.

This is another card I made using the same sketch. I turned it sideways and used the Ghost and Goblins solid mat stack. The cauldron is cut from one of the cricut Halloween cartridges. I used glossy accents to help get the drippy effect with the Martha Stewart drippy goo punch. The sentiment is from the K Andrew Designs Fall-O-Ween set. It turned out pretty cute, and very different from the first one. 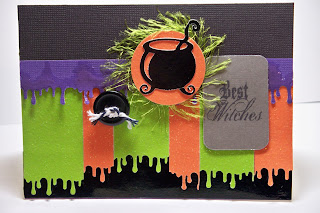 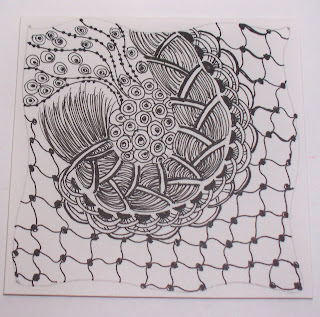 The tangle challenge this week at I am the Diva is the Brayd. There is a link to how to draw it on her site. This is kind of a rough draft as I haven't cleaned up the edges, but it was fun to draw. I filled the brayd part in a little differently from the original as it seemed to flow better while I was drawing.  I will probably put it on a card at some point.
Posted by Lynn B. at 9:42 PM 7 comments: 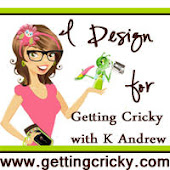